Outdoor cats include community cats (stray lost and abandoned pet cats and unsocialized feral cats) as well as owned cats that are allowed to roam. As per surveys, it estimates that three to four million cats – community and owned − enter animal shelters every year. At least half of them are euthanized.

This may occur for a variety of reasons, including age, illness, injury, temperament, lack of space, scarcity of homes, and owner request.

Although the number of cats euthanized has steadily declined since the 1970s, even socialized lap cats often face slim chances for adoption because there are just too many of them and too few resources.

Owned cats who are let outdoors may become sources of nuisance complaints and neighborhood disputes. While approximately 80-85% of owned cats are sterilized, the remaining 15-20% can have kittens who may or may not find homes. Community cats are the most significant source of cat overpopulation because only approximately 2% have been sterilized. They produce approximately 80% of the kittens born each year.

Feral and stray cats are often confused, but there are significant differences between them. Stray cats are owned pets who are lost or abandoned. They are accustomed to contact with people and may be reunited with their families or adopted into new homes.

Feral cats are the unsocialized offspring of owned, stray cats, or other feral cats who have not been spayed or neutered. Feral cats are not accustomed to contact with people and are typically too fearful and wild to be handled.

Feral cats who have spent their entire lives outdoors can sometimes adapt to indoor life, but attempts to tame adult feral cats can divert time and energy from the most important objective: reducing the population of community cats. 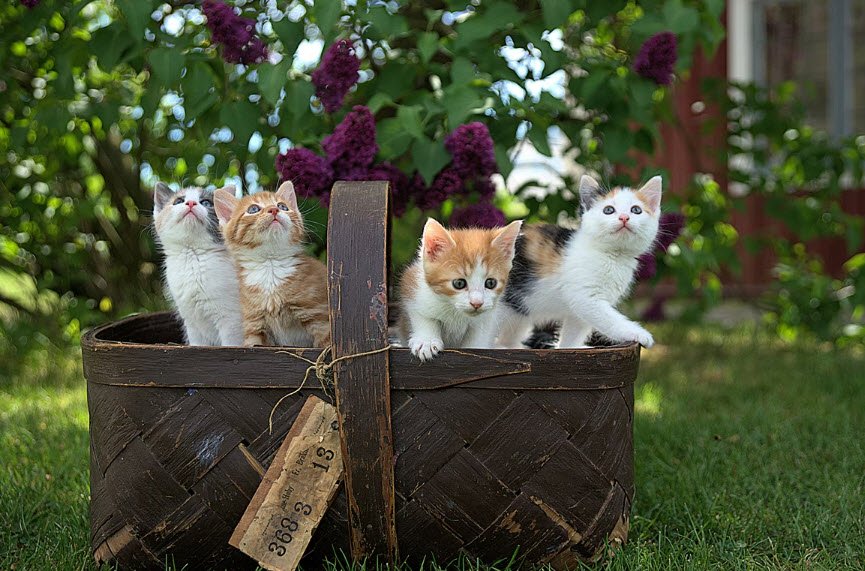 Reducing the number of community cats and managing their care is the goal of various programs. The basics of these programs involve trapping the cats in who live together in a group known as a colony, having them spayed or neutered, vaccinating them against rabies, identifying them with an ear tip, and returning them to their original territory where a caretaker provides regular food and shelter and monitors the colony for newcomers and any problems.

Ear tipping is a procedure where a quarter inch off the tip of the left ear is removed in a straight line cut (performed while the cat is anesthetized during spay/neuter surgery).

It is the only reliable method known for identifying a spayed/neutered feral cat. These program process also allows for friendly cats and kittens to be identified and, if possible, sent to adoption and foster programs, causing an immediate reduction in the number of community cats in the area.

Life is especially hard for these cats whose populations are not managed through these such programs. They are constantly searching for food in dumpsters and garbage cans and may be hunting birds and other wildlife, with or without success.

They may also be fed by kind-hearted people who don’t spay and neuter them. These people mean well, but they don’t realize that cats should be spayed and neutered as soon as possible to improve their quality of life and prevent the birth of more kittens. Other people who are interested in getting the cats sterilized can’t find veterinarians to work with feral cats or low-cost spay/neuter options.

Also Read: Muzzles: A Dog’s Tool to Keep Everyone Safe

Un-spayed community cats can become pregnant as early as 5 months of age and typically only have one live litter per year, with an average litter size of three to four kittens.

Up to 75% of the kittens may die–usually from poor nutrition, disease, parasites, or predation − before they reach adulthood. Those who survive will become feral without socialization to people at a young age (usually under 8 weeks).

Un-neutered male cats will roam in search of food and fight for mates. They may be hit by cars, killed by wildlife, poisoned, etc. Without spaying and neutering large numbers of community cats, their numbers rapidly increase.

Community cats often live in a colony – a group of related cats. The colony occupies a specific territory where food (e.g., a restaurant dumpster, a person who feeds them) and shelter (e.g., beneath a porch, in an abandoned building) are available.

Outdoor cats can create significant challenges to the animal welfare system and to the community at large. Animal shelters usually euthanize feral cats because they are not adoptable as pets.

A shelter in a community with a large, un-sterilized outdoor cat population may experience

From a human quality-of-life standpoint, people are bothered by outdoor cats for many reasons, including

When community cats are not managed and/or there is concern for their safety, people often want the cats to be taken away.

In most cases, once the cats are spayed and neutered and the neighborhood is educated, hostile situations quickly calm down.

In addition, because feral cats are intimately tied to their own territory where they were born and have spent their entire lives, relocation should be a last resort because, even when it is done properly, many of the cats will disappear after they are released, in search of their old territory.

A valid reason to consider relocation of feral cats would be if the cats face imminent danger − for example, the scheduled demolition of the empty building in which they are living.

Basic Handling and Safety of Horse