The fact that an organism can live for hundreds of years, is quite astonishing in itself. Life for such creatures is an amalgamation of adaptability, evolution, and some unique physical features, that make them what they are; near immortals.

Turritopsis nutricula, or the immortal jellyfish, can only die due to diseases or predatory attacks, and NEVER due to old age. They are the only creatures known, to have this unbelievable ability.

The diversity of the marine biome is not unknown to anyone. From fish to octopuses, and microscopic picoplankton to whales, marine wildlife contains the highest number of life forms on the Earth.

Two-thirds of the Earth is covered with water (oceans, seas, freshwater rivers, lakes, ponds, etc.), and it is enthralling to know that some of these fascinating animals have lived under the layers of the water since hundreds of years.

Most of the creatures with incredibly long lives, are mostly found below the depths of oceans and seas, and very rarely will you find a creature of the land, to have a very long lifespan, the most common characteristic among these creatures is the growth rate.

You would be surprised to know that a slow growth rate helps these creatures to live for such a long period of time. Physical and sexual maturity eventually leads and organism to perish. Therefore, a slows growth rate, slows down the entire process of its life cycle, thus increasing its years on Earth.

There are several species of sea creatures that have incredibly long lives. Here are a few examples:

The immortal jellyfish (Turritopsis dohrnii) is a species of small, translucent jellyfish that is known for its ability to potentially achieve immortality. This jellyfish has the ability to revert back to its juvenile form after reaching sexual maturity, allowing it to potentially live forever as long as it is not physically damaged or killed by predators.

The immortal jellyfish is native to the Mediterranean Sea and has been found in other areas around the world, including Japan, the United States, and South America. It is a small jellyfish, with a bell that typically measures less than half an inch in diameter. It feeds on small plankton and other small organisms.

The immortal jellyfish’s ability to potentially achieve immortality is a result of its unique life cycle. When it is threatened by environmental stress or physical injury, the jellyfish can transform its cells into a juvenile form and begin the life cycle again. This process, called transdifferentiation, allows the jellyfish to potentially regenerate indefinitely.

While the immortal jellyfish’s ability to potentially achieve immortality is an interesting phenomenon, it is important to note that it is not truly immortal. It can still be killed by predators or physical damage, and it is not clear how long an individual jellyfish can live through this process. In addition, the immortal jellyfish is not the only species that exhibits some form of regenerative ability. Many other animals, including certain species of salamanders, can regenerate lost body parts or tissue.

Sea turtles are large, aquatic reptiles that are found in tropical and subtropical oceans around the world. There are seven species of sea turtles, including the green turtle, hawksbill turtle, leatherback turtle, loggerhead turtle, Kemp’s ridley turtle, olive ridley turtle, and flatback turtle.

Sea turtles are characterized by their large, streamlined shells and flippers, which they use to swim through the water. They are adapted to life in the ocean, but they do come ashore to lay their eggs on sandy beaches. Sea turtles are found in a variety of marine environments, including coral reefs, seagrass beds, and open ocean.

Sea turtles are threatened by a variety of human activities, including habitat destruction, pollution, and overharvesting. They are also vulnerable to being caught as bycatch in fishing gear. Sea turtles are protected by international laws and are listed as endangered or threatened under the Endangered Species Act in the United States.

Conservation efforts for sea turtles include protecting their nesting habitats, reducing marine pollution, and regulating the harvest of sea turtles and their eggs. In addition, sea turtle rehabilitation centers and research programs work to rescue and care for sick and injured sea turtles, with the goal of releasing them back into the wild.

The bowhead whale (Balaena mysticetus) is a large species of whale that is found in the Arctic and sub-Arctic waters of the North Atlantic and North Pacific oceans. It is one of the largest species of whale, reaching lengths of up to 60 feet and weighing up to 100 tons.

The bowhead whale has a distinctive appearance, with a large, triangular head and a short, triangular dorsal fin. Its body is dark in color, ranging from black to dark brown, and it has a glossy appearance due to the presence of small, smooth scales on its skin.

Bowhead whales are migratory animals and are known for their long-distance movements. They follow a predictable pattern of migration, moving between their summer feeding grounds in the Arctic and their winter breeding grounds in more southern latitudes. They feed on a variety of small organisms, including krill, copepods, and small fish.

Like many other whale species, the bowhead whale was heavily hunted in the past, leading to significant declines in its population. Today, it is protected by international laws and is listed as a species of “least concern” by the International Union for Conservation of Nature (IUCN). Despite this, there are still ongoing concerns about the impact of human activities, such as oil and gas development, on the bowhead whale’s habitat and population.

The red sea urchin (Mesocentrotus franciscanus) is a species of sea urchin that is found along the Pacific coast of North America, from Alaska to Baja California. It is named for its distinctive red or purple spines, which are used for defense and for attaching to rocks and other surfaces.

Red sea urchins are small, spherical animals that are typically about 2-3 inches in diameter. They have a hard, spiky exoskeleton that is made up of calcareous plates, which are held together by a flexible material called an interambulacral membrane. The urchin’s spines are attached to these calcareous plates and are used for movement, defense, and attaching to surfaces.

Red sea urchins are found in a variety of marine environments, including rocky shores, kelp forests, and deep sea environments. They feed on a variety of algae and other small organisms, using their five-toothed mouth, called an Aristotle’s lantern, to scrape off food from rocks and other surfaces.

Red sea urchins are an important part of the marine ecosystem and play a role in maintaining the health of kelp forests and other marine environments. They are also an important food source for many species of fish and invertebrates. However, red sea urchins are vulnerable to overharvesting and habitat destruction, and their populations can be negatively impacted by these activities.

The geoduck (Panopea generosa) is a species of large, edible saltwater clam that is native to the Pacific coast of North America, from Alaska to California. It is the largest burrowing clam in the world, and it is known for its long neck, or siphon, which can extend up to three feet in length.

Geoducks have a hard, oval-shaped shell that is typically brown or green in color. They live in the intertidal zone, burrowing into the mud or sand and extending their siphon out of the ground to filter feed on small organisms in the water. Geoducks can live for up to 150 years and can grow to weigh up to 10 pounds.

Geoducks are an important food source in some parts of the world and are highly prized for their large size and sweet, firm flesh. They are often served in raw form, such as in sushi or sashimi, or cooked in various dishes.

Geoducks are vulnerable to overharvesting and habitat destruction, and their populations can be negatively impacted by these activities. As a result, geoducks are subject to various conservation and management measures, including size limits, harvest quotas, and closed seasons, to ensure the sustainability of their populations.

The rougheye rockfish (Sebastes aleutianus) is a species of marine fish that is found in the North Pacific Ocean, from the Bering Sea to California. It is a member of the rockfish family (Sebastidae) and is known for its distinctive appearance, with large, protruding eyes, a spiny head, and a mottled red and orange body.

Rougheye rockfish are long-lived, slow-growing fish that can reach lengths of up to three feet and weights of up to 20 pounds. They are found in a variety of marine environments, including rocky reefs, kelp forests, and deep sea environments, and they feed on a variety of small fish, crustaceans, and other invertebrates.

Rougheye rockfish are an important food source for humans and are valued for their flavorful flesh. They are also an important part of the marine ecosystem, playing a role in the health of the habitats in which they live. However, rougheye rockfish populations have been negatively impacted by overfishing and habitat destruction, and they are considered to be a species of concern in some areas. As a result, conservation and management measures, such as size limits, harvest quotas, and closed seasons, have been implemented to help protect and sustain rougheye rockfish populations.

The ocean quahog (Arctica islandica) is a species of large, edible saltwater clam that is found in the North Atlantic Ocean, from Newfoundland to North Carolina. It is also known as the black quahog, the Icelandic clam, or the mahogany clam.

Ocean quahogs are large clams, with shells that can reach up to six inches in length. They have a hard, brown or black shell that is lined with concentric rings, which are used to determine the age of the clam. Ocean quahogs are long-lived animals, with some individuals living for more than 400 years.

Ocean quahogs are found in a variety of marine environments, including rocky shores, sandy beaches, and mudflats. They feed by filtering small organisms from the water using their siphons. Ocean quahogs are an important food source for humans and are highly valued for their firm, sweet flesh. They are often used in chowder, clam cakes, and other dishes.

Antarctic sponges are a group of aquatic animals that belong to the phylum Porifera. They are found in the Southern Ocean surrounding Antarctica and are adapted to survive in the cold, harsh conditions of this region. 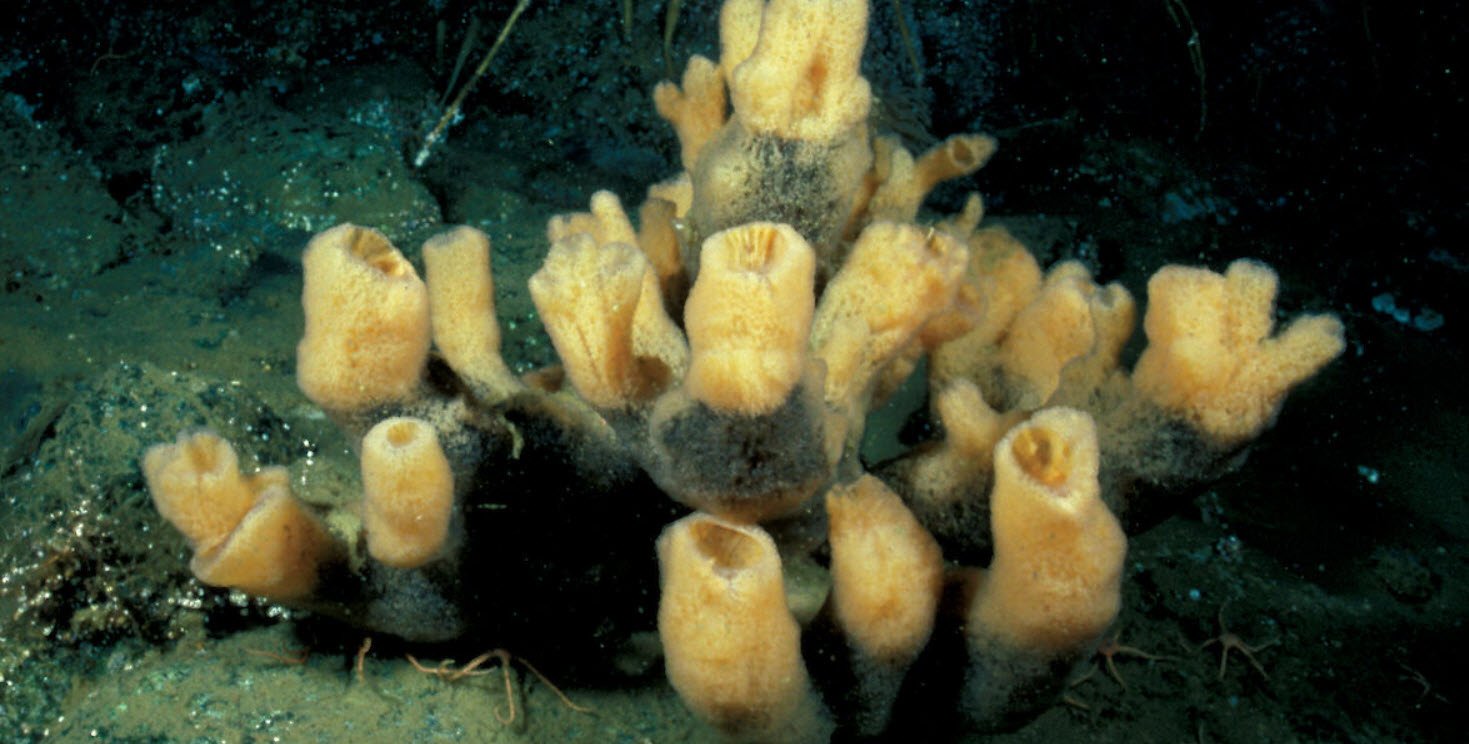 Antarctic sponges are found in a variety of marine environments, including shallow water, deep sea environments, and attached to the underside of ice floes. They can be found at depths ranging from the intertidal zone to more than 13,000 feet below the surface.

These creatures are among those beautiful animals that have survived the numerous natural threats and calamities, and have adapted themselves to the changing surroundings. However, constant human interference is bound to threaten their existence, and therefore, it is of utmost importance to spread awareness. The lives of all living beings are equally important. If they die, we cannot survive either!

You may also read:

Why Do Dogs Bark? – A Brief Guide & Ideas

Choosing the Right Diet For Your Cat

Basic Handling and Safety of Horse